You are here: Home / NEWS / DIRECT IMPRISONMENT FOR DOG FIGHTERS 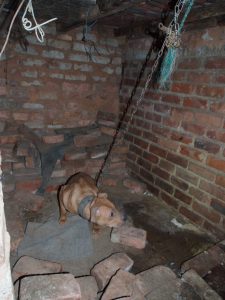 The National Council of SPCAs (NSPCA) are elated by the conviction and sentencing of six individuals for their involvement in the heinous and underground world of dog fighting in the Atteridgeville Magistrates Court.

The NSPCA rescued 14 Pit-Bull fighting dogs from atrocious conditions in Atteridgeville last year. The six individuals who appeared in the Atteridgeville Court were found guilty for their part in dogfighting and animal cruelty offences and were all sentenced to years of direct imprisonment by Magistrate JC Kruger for the possession of dogs for the purpose of dogfighting and for the dreadful living conditions they were subjected to.

Kamogelo Mpiyane,  Tshepo Aubrey Sejabatho, Enos Makhamatha, Jabu Phillip Mabena and Samuel Mashilo Mothiba were all sentenced to two and a half years of direct imprisonment with no part suspended and no option of a fine for owning and keeping fighting dogs, as well as subjecting these dogs to filthy living conditions and denying them medical care. Jabu Phillip Mabena was sentenced to a further six months for the torture of the dog Mia.

“Mia was kept in a cold, dark room, chained so tightly to the roof rafters above that she couldn’t lie down. She was sick from disease and infected wounds, and was unable to even reach water” explained Senior Inspector Wendy Willson, manager of the Special Investigations Unit.

In his sentencing; Magistrate Kruger said that the crimes that the accused were guilty of were both pointless and perverse and he must sentence accordingly to ensure that the punishment serves as a warning to others who may be involved in dog fighting or any of its associated activities.

Samuel Ribane was sentenced to 12 months of direct imprisonment for his part of merely watching a dog fight unfold with Magistrate Kruger pointing out that he had had ample time to distance himself from these criminal activities  but chose not to.

These imprisonment sentencing’s, regardless of the fact that the accused pleaded guilty, reflect a shared sentiment amongst the South African courts that the crime of Dogfighting will not be tolerated. In this year alone 12 criminals have been sentenced to prison time ranging from 12 months to 5 years for participation of any sort in dogfighting activities.

The Special Investigations Unit has secured the conviction of 50 dogfighters to date with many more awaiting prosecution and relies strongly on the continued support of the public and organisations such as the DogTrust Worldwide who recognise the importance of continuing this fight against this heinous crime.