You are here: Home / NEWS / Discrepancy in handing out of Title Deeds of RDP houses 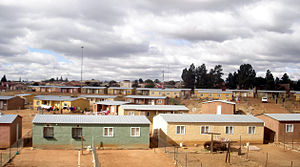 A programme was recently launched, without Council’s knowledge, to hand out Title Deeds to RDP houses in certain sections in Hankey.

The matter was brought under the attention of Kouga Municipality by residents who were worried about the secretive way it was done. Of major concern was if the beneficiaries had been properly verified.

The handing out of the title deeds has since been put on hold because it was discovered that there were discrepancies when it came to the beneficiaries and the discrepancies are being investigated now.

During a Special Council meeting Mayor Elza van Lingen made an appeal to councillors and officials for their support in this matter. Thousands of Kouga people have been waiting for houses or title deeds for many years and underhandedness to sabotage cannot be allowed. Houses should be delivered to the correct beneficiaries.