Kevin Wilson, whilst being on holiday in Jeffreys Bay with his family from Gauteng, walked into the ocean for a swim on 16 December 2014, never to return. Being a young man, who loved the beach and what the ocean offered, may not have been as experienced, but that was to be his last swim, perhaps a happy place to be.

Whilst being at a Beach front restaurant a few friends gathered after a very hot and busy Street Carnival that just ended, being all part of this carnival is was time to relax. A crowd started gathering and Sam Beale went over to look and met up with Mrs Wilson, being in total shock understandably and help and assistance was quickly arranged.

Very soon after the air and the sea was abuzz with light aircraft and NSRI and jet skis looking for the body, but to no avail. His body was later found on the 20th December 2014.

Sam later attended a Memorial Service on the Beach and posted this on Facebook afterwards : 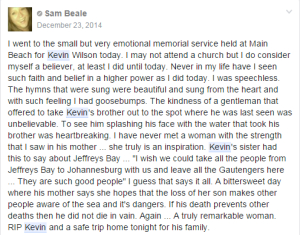 As you probably all know, the body of Kevin Wilson who drowned at Main Beach on Tuesday, was found. His mother phoned me to tell me the “good news” …. she was actually happy that God had answered her prayers and brought her child back to her. I have never felt more humbled. She is overwhelmed by the love and support shown to her by the residents and support services of Jeffreys Bay. She asked me if I would go to Main Beach where he drowned every year on my birthday, because it happened on my birthday, to throw white Roses into the sea. I will do this for as long as humanly possible. I am honoured to do this for her in his memory. We are going down to the beach on Tuesday morning to scatter flowers before she takes him back home. If anyone wants to accompany us please let me know. RIP Kevin xxx

Sam Beale, if we may on behalf of residents of JBay, thank you for this lovely gesture and once again displaying the nice spirit of our people. Happy Birthday to you and God Bless.