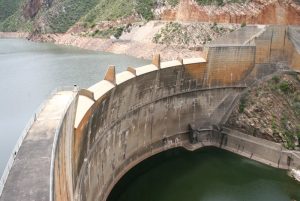 Dam levels in the Kouga Region are currently at 26% combined capacity. Kouga Dam currently at 8% is reported dropping 1 % of water per week. The Eastern Cape is experiencing one of the most intense droughts in many years with record lows being recorded. Current dam levels as of 12 January 2018 are below. 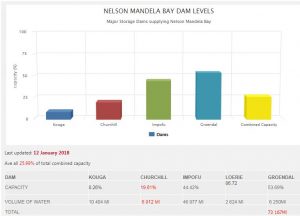 January & February are known dry months, but 2018 has been severy with high temperatures and humidity coupled with warm winds taking the comfort level to the limit.

Water shortages in Hankey and Patensie, will result in water-shedding being implemented shortly.

Many residents are concerned that the water shortage all over Kouga are not being taken serious by the entire community with a no care attitude very prevalent. Sadly it does not appear that water abusers are being policed as the average resident prefers to look the other way,  not wanting to get involved with disputes. Public entities where showers are used by the public also appears not to be properly controlled.

Cape Town is scheduled to close their taps mid April 2018 if the current situation remains.

The results of bore hole drilling as well as local desalination projects are awaited anxiously.

When will the people take this serious?