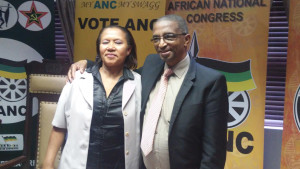 A well-known educator and seasoned political activist is the new Executive Mayor of the Kouga region. Clr Daphne Kettledas was elected to the position at a Special Council Meeting on Monday, 11 May 2015. Her election follows the resignation of Clr Booi Koerat as Executive Mayor due to health reasons.

In her acceptance speech Clr Kettledas thanked the outgoing Mayor for the contribution he had made towards creating a non-racial and non-sexist, democratic South Africa.  She also acknowledged the strong leadership role played by the Mayoral Committee and encouraged them to continue rendering their services to communities with the commitment they deserve.

“I must take this opportunity to congratulate all who have laid the foundation before me. Your actions, experiences and ability have made it possible for me to take over with such ease,” she said.

She said the Mayoral Committee would remain unchanged, save for the addition of Clr Koerat as the portfolio councillor in charge of Special Programmes in the Office of the Executive Mayor.

She cautioned that her election was not an occasion to celebrate but rather a breather in preparation for the service delivery challenges that lay ahead.

She further made a call for unity across the political divide and confirmed her commitment to engaging with all stakeholders.

“The quality of our leadership will not be measured by good speeches but through collective action … It is my policy to have an open door and to listen to all the people and benefit from their experience and aspirations.”

Clr Daphne Kettledas is the first woman Executive Mayor of the Kouga Council. Born and bred in Humansdorp, where she also taught for 31 years at Graslaagte Primary, she is no stranger to the people of Kouga. She became involved in politics during the 1980s as a student and has since been active in various political structures.