We Remember the “March for 100 Reasons”

This week marks the remembrance of the “March for 100 reasons” that was staged on 6 February 2015. The residents of Jeffreys Bay had enough of the dismal service delivery efforts of the ruling party of the Kouga Municipality at the time. This action was taken because of ongoing frustrations but mainly because of infrastructure crumbling during Nov/Dec 2014 that caused great harm to our society, specially the tourism industry, due to the nature of what Jeffreys Bay is all about.

The week started on Sunday the 1st of February when local MP at the time, Elza van Lingen was invited to a Q+A session on the Jeffreys Bay Facebook Group, the first of such format taking to social media locally. Very relevant questions were posted which were well responded to by Mrs van Lingen.

We engaged in daily work sessions after hours with residents in order to produce the 100 Reasons which was to be handed over on the Friday during the petition at Kouga Mun. 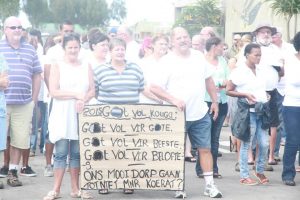 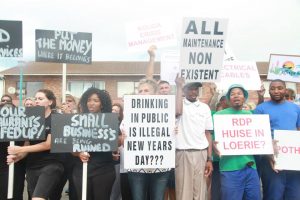 The official petition as well as the 100 Reasons was handed over on Friday 6 Feb 2015 at Kouga Mun to the Mayor at the time, Mr Booi Koerat by the petition committee. What followed was not good at all. One of the banner carriers were pulled aside by the Municipal Manager, Mr Sydney Fadi, not agreeing that the Mayor should speech with our March Banner behind him, causing a scuffle with SAPS Ops personnel having to usher the councillors into the Municipal grounds, locking the gate. This certainly caused a distraction specially for the media as this went out on TV broadcast. 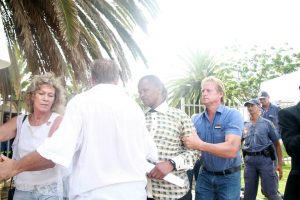 The Eastern Cape Government Petitions Commision did meet with the Jbay Petitions committee on a few occasions to facilitate the actions required as list on the 100-List. The rectification of many aspects did commence as a result.

We sadly also remember 2 stallwards of the residents association at the time, people who gave many hours towards keeping the association alive. Due to a illness they are no longer with us today. We remember Garth Ford and Laurika Nieuwenhuis who were passionate about the association and its work. May they Rest in Peace.

Looking back today, a lot of good has come to our region but many challenges still lies ahead and we wish those in power all the strength in this task.

Lets not forget those who worked hard to make this happen.

PS. At the time of doing this article, news broke of The Auditor General (AG) giving the Kouga Municipality a clean bill of health for the 2016/17 financial year by issuing an unqualified audit report. Well done indeed.