You are here: Home / NEWS / Sacred Khoi ritual at St Francis this weekend 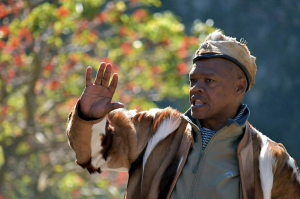 A sacred Khoi ritual will bring the culture of South Africa’s first nation to life at St Francis Bay this weekend.

A public gathering of the Khoi-San !Nau will take place at Granny’s Pool from Friday, 28 February, to Sunday, 1 March.

According to the provincial chairperson of the Links Royal House in the Eastern Cape, Paramount Chief Crawford Fraser (Gaokx’oab Kai Anib), about 100 delegates are expected to attend the historic event.

“Three !nau, which are sacred Khoi rituals, will be observed – the !Habab for young girls transitioning into women, the Doro for young boys becoming men, and the Leadership !nau where men and women become headmen and headwomen, senior headmen and senior headwomen or goakx’oab (chiefs),” he explained.

“The delegates will assemble at the venue from 10am on Friday,” he said.

“At sunset the !nau delegates will go into seclusion in temporary huts, with the official traditional ceremony set to start at midnight.

“Three temporary huts will be constructed – one for males, one for females and the third where the sacred process will take place.

“Before sunrise on Saturday morning, the delegates will undergo a cleansing ceremony.

“Ritual sacrifices will also take place from just after midnight to sunrise.

“After sunrise, the traditional leadership and delegates will have breakfast, following which the official !nau progamme will start.”

He said the official programme was expected to conclude just after 1pm on the Saturday, after which the public was welcome to join in the celebration, which would last up until Sunday evening.

Executive Mayor Horatio Hendricks said it was an honour for Kouga to have been selected to host the sacred event.

“The municipality has had several meetings with the organising committee, under the leadership of the three houses, as it is important for all of us that the event and ritual sacrifices happen in strict accordance with the relevant legislation.

“A health inspector will be visiting the site each day to guide the organisers in this regard.

“In terms of our agreement only six sheep will be sacrificed at the venue. All other sacrifices will take place off site,” he said.

Hendricks said the municipality was working closely with the organisers to ensure that all safety and fire regulations were met.

“Additional ablution facilities and waste collection services will also be place for the duration of the event.”

Paramount Chief Fraser said the safety of all participants was of great importance to the organisers.

“There will be an ambulance on site. A safety officer has also been appointed and there will be marshalls to help direct traffic and guide participants, as needed,” he said.