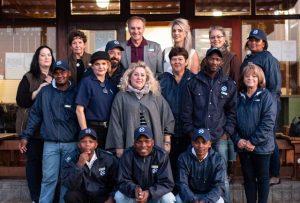 The Annual General Meeting of SPCA ASSISI was held at the Jeffreys Bay Bowls Club on 5 June 2019.

The AGM was very well attended by senior municipal staff and directors, previous chair persons of the Society as well as local business, members of the society and the general public.

Highlights of the evening included the recognition of contributions by local business as well as certain committee and staff members with certificates of appreciation being handed out. Businesses who received Certificates were: Shmart Security, True Technology, IGEN Jeffreys Bay, PRINTCORE, JBay Print and Polypharm.

A first was also the Veterinary report presented by Dr Kriel as part of the various reports feedback, stressing again the urgency of better control of animals within Kouga Region.

During his Chairman’s report, Gerhardt Fouche thanked Local business and residents of the Kouga for their continued support to the Society and stressed that the management of the society were in good hands, being productively managed. He went on to quote the NSPCA Chairman of Board of Directors, THEA SMIT:

“LET US NEVER BE AFRAID TO DO WHAT IS RIGHT, ESPECIALLY WHEN THE WELL BEING OF AN ANIMAL IS AT STAKE. THE WOUNDS INFLICTED ON OUR SOULS WHEN WE LOOK THE OTHER WAY, ARE FAR GREATER THAN THE CRITICISM AND PUNISHMENT OF SOCIETY”

The Society also tabled the amendment of their constitution that was approved by the AGM. This amendment confirms the area of responsibility to be the area defined by the KOUGA Region. SPCA ASSISI has been proactive in the proposal of a KOUGA Animal Management Committee. This committee has been approved by the KOUGA Council and is awaiting final approval by the Mayoral Committee.  The Society will publish more info on this committee soon.

The selection of a new SPCA Committee concluded the evening’s activities. The new committee will soon by introduced to the public.

The general public is urged to become members of the SPCA Society, with great incentives forming part of the membership package. More information will be published soon.