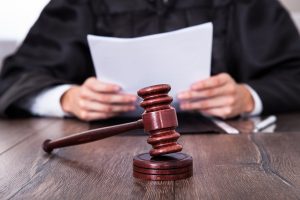 In what is believed to be the biggest court case South Africa has ever seen, an initial 66,000 pensioners instituted a class action against Transnet Second Defined Benefit Fund and Transnet. The claim is currently estimated to be over 100 Billion Rand. When this payout succeeds it would do mayor damage to the SA Economy according to Economist, Dawie Roodt. All indications are that Transnet would settle out of Court. Transnet Chairperson Popo Molefe and the Public Enterprises Minister Pravin Gordhan has been very active in cleaning Transnet up post Gupta era. Transnet needs to cleanse itself of “pervasive corruption” so it can improve efficiencies and win back public and investor confidence, its newly confirmed chairman says. Adv Anton Alberts, FF Plus Chairman is currently on a road trip communicating with pensioners all around the country and hopes to reach every possible area where pensioners reside.

In 2013‚ the 60 000 pensioners instituted a class action against the Transport Pension Fund‚ the Transnet Second Defined Benefit Fund and Transnet.

Their claim was based on a promise made to them in 1989 that they would receive the same pension benefits under a commercial entity‚ Transnet‚ as they did under the state entity that employed them until then‚ the South African Transport Services (SATS) and its two pension funds.

The promise was that the practice of annually increasing members’ pensions by at least 70% of the rate of inflation would continue. The pension funds kept the promise until 2002‚ when the funds failed to grant any pension increases beyond the minimum of 2% per year. The pensioners had calculated that the debt owed to the two pension funds stood at R80bn by March 2013.

In his judgment‚ Constitutional Court Justice Johan Froneman said the pensioners – in their particulars of claim – pleaded that the 1989 promise was made orally by the general manager of SATS. It was also made by the Minister of Transport at meetings throughout the country with some 80,000 SATS employees in May and June 1989.

He said the terms of the contract were expressly and clearly set out and so were the parties bound by those terms. “There is nothing vague and embarrassing that prevents [the pension funds and Transnet] from knowing what case they have to meet‚” Froneman said.

The case represents about 60 000 pensioners, many of whom have found themselves destitute because their Transnet pensions have not kept up with the cost of living. Today only about 44,000 pensioners are still alive.

According to a 2013 estimate by the legal team representing the pensioners, 80% were receiving less than R4 000 a month, 62% less than R2 500 a month and 45% less than R1 600 a month. Some pensioners got only R1 a month after deductions such as contributions to the Transmed Medical Fund 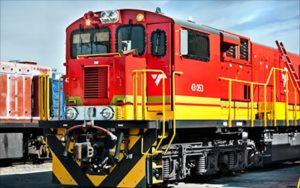 FF Plus encouraged by Gordhan’s words on Transnet pensioners’ claim

The Freedom Front Plus said it was encouraged by Public Enterprises Minister Pravin Gordhan’s response to its question about the plight of thousands of Transnet pensioners.

The approximately 40‚000 pensioners achieved a victory at the Constitutional Court last month when the court granted a go-ahead for their claim to recover billions owed to them.

The Freedom Front Plus had asked Gordhan in May 2018 to discuss a possible settlement of the class action by the pensioners‚ following the Constitutional Court judgment last month.

Speaking during the budget vote of the department on Tuesday‚ Gordhan said Transnet appeared willing to settle‚ but added that the matter was still with the courts.

“But I think what’s blocking the two sides from getting together is possibly an extravagant evaluation of what pensioners are entitled to as opposed to what might really be the case. “If all of us can encourage a realistic amount in this particular case‚ we are quite willing to bring parties together and see how we can deal with this particular story‚” Gordhan said.

The FF Plus said it considered the minister’s statements to be positive and a step in the right direction.

“The party hopes that a fair settlement will be reached soon for the sake of the approximately 40‚000 pensioners who have suffered years of poverty and misery due to the fact that the money in their pension fund was looted‚” FF Plus chairman and parliamentary spokesman on transport Anton Alberts said. Adv Alberts is of the opinion that the case should be finalised by no later than 2019. The upcoming elections in May 2019 may very well play a role as this hot potato is currently in the ANC lap.

Advocate Anton Alberts met with Transnet Pensioners in Jeffreys Bay on 25 September to discuss the current status of this court case.  He also shared the history of the case with those present, a fully packed out Seashells Conference Room, whilst many other pensioners on Facebook requested similar visits. Adv Alberts will be doing the rounds to cover as many of the towns where these pensioners are situated. 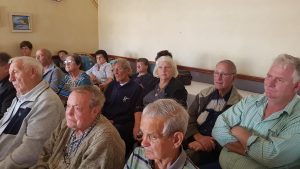 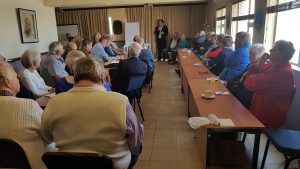 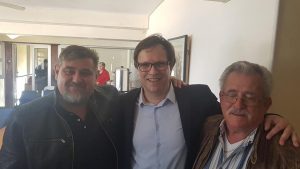 Your law team informed that the counter-offer made by Transnet was not acceptable. The law team entered into discussions with the Transnet law team and a response from Transnet is expected within 10 business days. Thereafter the law team will advise the way forward.

We are pressuring Transnet for another bonus to be paid at year-end. We will keep you updated in that respect.