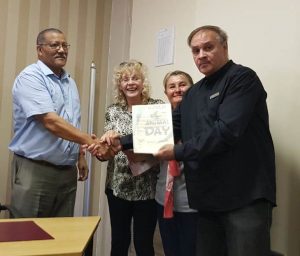 After the Year end report was released by Kouga Municipality during 2019, it became apparent that no platform existed with the Municipal structures where animal management was discussed.

With this in mind, the current SPCA Chairman, Gerhardt Fouche, proposed that an animal management committee be established during a presentation to council.

After the Kouga Council approved the concept the very first committee convened on 21 November 2019 to consider the purpose, objectives, role players and membership. The meeting was well represented by the SPCA, and both the St Francis (Susan Rae Fox) and Jeffreys Bay (Jessica Naude) Animal Rescue Sanctuaries.

All Animal Welfare Organisations (AWO’s) had an opportunity to explain the role they play in the society. It was also confirmed that a good and healthy cooperation exist between the AWO’s which bodes well for the community and animals within the Kouga Region.

A declaration was also handed to Clr Danny Benson, Portfolio Clr Community Services, wherein all the Animal Welfare Organisations plea to the Kouga Municipality to
“consider the welfare of ALL animals in the Kouga Region when taking decisions on events which may have a serious impact on the welfare, safety and security of the animals”

This declaration was signed on World Animal Day on 4 October 2019 by all the Animal Welfare Organisations in the Kouga Region.

An interim work group was established to formulate the terms of reference and would consist of Managers and Leaders in the various organisations and will produce this with the guidance of Christa Venter from the Directorate Community Services. More details of the committee’s functions and the community’s role here will be shared soon.