Sebastian Williams (Durban) gave a motivated and enthusiastic South African Junior Surfing team a boost by delivering an outstanding performance in the last heat of the day at the VISSLA ISA World Junior Surfing Championships in the Azores on Sunday.

Tiny waves and a storm that put the competition on hold for two hours presented challenging conditions for the more than 370 surfers from 39 nations in the world’s biggest junior surfing event.

As the predicted swell increase started filling in during the afternoon, Williams dominated his 20 minute Round 1 encounter, riding 10 waves and posting one of the highest heat single ride scores, 8.67 out 10, and highest heat totals, 13.84 out of 20.

Williams joins teammates Max Elkington (Kommetjie), who won his opening heat on Saturday, and Angelo Faulkner (Jeffreys Bay), who grabbed second spot earlier on Sunday, in Round 2 of the U16 Boys Main Event. Koby Oberholzer (Warner Beach), the fourth SA team member in the U16 Boys will be in action later today.

Sunday’s action started with the U18 and U16 Girls competing simultaneously in front of the two podiums. Sophie Bell (Salt Rock) earned a comfortable runner-up berth and advanced while her U18 Girls teammate Crystal Hulett (Cape St Francis) struggled to find waves that offered scoring potential in the marginal conditions and became the first team member to drop into the Repercharge rounds.

South Africa’s U16 Girls, Jeffreys Bay residents Kai Woolf and Kirsty McGillivray, both finished second in their respective heats to remain in the Main Event stream.

Jordy Maree (Kommetjie) will be in the first heat at 11am today when the U18 Boys division resumes. He and Bevan Willis (Salt Rock) will be determined to advance and join Joshe Faulkner (Jeffreys Bay) and Adin Masencamp (Strand) who progressed to Main Event Round 2 when they competed on Saturday.

Surfline, the official forecaster, is predicting that a healthy chest to shoulder high swell will build on Monday, September 19 and largely hold for Tuesday, September 20. A larger swell is expected to fill in on Wednesday, which looks set to provide solid, overhead surf.

The action at the VISSLA ISA World Junior Surfing Championship can be watched LIVE at www.surfingsouthafrica.co.za starting at approximately 11am SA time daily. The latest news, results, photographs and video footage are also available on the website.

Surfing South Africa is the recognized governing body for the sport and is a member of the South African Sports Confederation and Olympic Committee (SASCOC) and the International Surfing Association (ISA). All South African surfing teams that participate in international events are chosen by the National Selectors and in terms of the SSA Constitution. All national teams are ratified by the Board of Directors of Surfing South Africa prior to being forwarded to SASCOC for colours approval 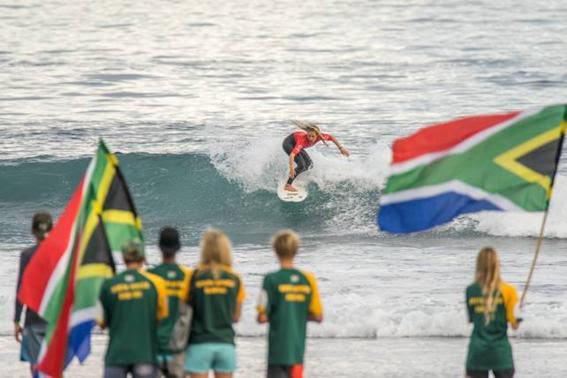 Pictured: Kai Woolf (Jeffreys Bay) in action in front of her teammates on her way to second place in her heat and a berth in Round 2 of the U16 Girls at the VISSLA ISA World Junior Championships in the Azores on Sunday. Photo: ISA / Evan