You are here: Home / NEWS / THE CIRCUS AT THE JOHANNESBURG ZOO – RUN BY CLOWNS FROM THE TOP DOWN 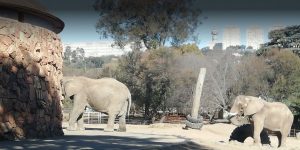 As if it is not enough to move two more elephants from a semi-wild environment and condemn them to a life of incarceration in inadequate facilities; these majestic, intelligent, and incredible creatures were forced to perform circus tricks to spectators that were welcomed into the Zoo for free today to supposedly celebrate World Elephant Day.

“These animals have already been put through hell in training them; elephants are beaten into submission, chained, and tortured to be able to perform these tricks. Now they are living in a completely inadequate captive environment where they are being forced to perform these tricks – this involves ongoing elements of control and discipline. In the name of entertainment. To ensure continued support of a zoo that clearly does not care about their animals” said Meg Wilson of the NSPCA.

The NSPCA was at the Johannesburg Zoo last week where they were told that the Zoo was currently preparing for World Elephant Day. When questioned, the Zoo assured the NSPCA that the elephants would not be impacted in any way – yet today the elephants had to perform for spectators and showed signs of undeniable stress.

It is inconceivable that the Johannesburg Zoo would further promote the suffering of these sentient and sensitive creatures – it is nothing less than irresponsible and cruel.

The NSPCA remains of the opinion that wild animals belong in the wild.